Rock singers often end up with vocal problems. Too often those problems are exposed in the press: shows canceled, recording dates postponed, bands replaced in tours because the singer had no voice. Rock and roll is a big noisy emotional business and singers tend to rant and rave until their voices are shot. The music industry doesn’t care because there’s always the next young rock singer waiting to take the place of the old used up one. But if it’s your voice, what happens to the rest of your career?

When you start singing in a rock band (or any band for that matter) you sing from an intuitive place. Open your mouth and the song (and the feeling) comes out. But when you start learning the skills of singing, you become more self conscious. You pay attention to details such as pitch, tension and tone. Suddenly you are thinking too much, and that interferes with the emotion.

There is a balance that has to happen between skill and intuition. Part of you should pay attention to the technique and part of you to the feeling and the attitude. If you’ve been singing from attitude for all this time, then there is going to be a serious backlash while you learn skills and it’s upsetting when it happens to you. But have faith; as your skills become more ingrained, the emotion comes back and you’re ready for a long career.

I have a student who is very confused about the fact that his voice is changing. I don’t blame him. Up till not he has been shouting and hurting his voice. Now he’s paying more attention to how he produces sound, and he feels better. His higher notes are stronger, and his voice doesn’t get hoarse. But his band mates tell him that he sounds different. And he doesn’t feel as uninhibited. I know just how he feels.

Imagine that you are an amateur tennis player. You’ve got a great serve and are getting lots of attention from pro trainers. Once you sign up with one of them, they start changing things. You get mad. You say, why did you sign me if you are going to mess with the very things that are good about what I do? The trainer would say to you, as I am now, you’ve got a gift but it needs discipline. You must be able to do it day after day, in bad situations as well as good. You’ve got to learn your craft so you can be on top of your game all the time.

While talking to a very prominent producer the other day, I mentioned to him that rock singers came into my studio for voice training only after they were in trouble. He agreed with me telling me stories of singers he was working with in the studio, singers who were signed to major record companies, who had no idea how to take care of their voice, how to warm up, what to do when they had vocal problems. They hadn’t learned how to play their instrument yet.

I was surprised to hear this from him since he is the producer of some very high profile hard rock acts. I told him that most producers seem to want singers to sing higher, louder, longer and don’t really know much about using the voice as an instrument. He didn’t disagree with me, but he did say that a lot of the time, rock singers making their first record for a big label end up having to start voice lessons in the middle of the recording. He added that their singing usually suffered while they were having to concentrate on their technique. It takes a while for any singer to absorb a new method of singing. The emotion of the song has to be put on the back burner until the new technique becomes intuitive. 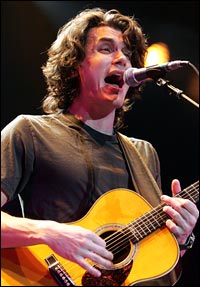 Many singers put off voice lessons until the last minute because they’re afraid of sounding “trained”, of losing their emotional connection to the music, of changing. But change can be for the better. You know when you’ve hurt yourself by shouting or pushing too hard; you know when that high note is killing you. Wouldn’t it be great if singing was easier? Wouldn’t it be nice to have a partner who understood your voice as well as or better than you? What a relief it would be to have a person you could tell your worries and fears about your voice and have them be able to help. That’s what a voice teacher does.

What You Learn In Lessons

The kinds of things you might learn in lessons include the basics like proper breathing, pitch and tone control and strengthening. But you also learn how to hit the high note without straining, how to move easily and flexibly throughout your whole range and how to increase your range. You learn how to sing for hours at a time without getting tired, what and when to eat and drink, how to turn in a great performance time after time. I’m sure you’ve heard stories of major artists having to cancel shows due to vocal strain, or having to lower keys the longer they’re on tour. A healthy voice shouldn’t have to go through this. If you know your instrument, it won’t happen to you.

I have a very famous client who has been putting up a good front, acting like his voice is fine – as if it just needed some rest. But he knew he was in trouble. He was afraid to fix it. Everyone around him relies on his singing for their income. He couldn’t confess that he was losing his voice, that the high notes were suffering, that his throat hurt. He was also afraid that his recognizable sound might change. But he overcame his fear and started lessons. He really didn’t know what else to do.

After working on his technique for six weeks he feels stronger, more confident and more in control. He’s been incredibly serious about practicing because he knows how much is at stake – his career and the livelihoods of many, many other people. And it’s paid off. His range is bigger and more flexible, he can sing longer phrases. In fact singing is just easier. Now he warms up before every rehearsal, performance or recording date. He knows he has an instrument he can rely on and he knows how to treat it so it will last.

Don’t wait until you are having serious problems. If you want your voice to last your whole lifetime, treat it with respect. Find a good working partner in a voice teacher who can help you strengthen and maintain your voice. Develop your relationship with your teacher now so you have someone to rely on when you need it.